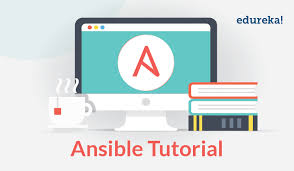 In this blog post, we will discuss Ansible Tutorial.

Ansible is a software tool that provides simple but powerful automation for cross-platform computer support. It is primarily intended for IT professionals, who use it for application deployment, updates on workstations and servers, cloud provisioning, configuration management, intra-service orchestration, and nearly anything a systems administrator does on a weekly or daily basis. Ansible doesn't depend on agent software and has no additional security infrastructure, so it's easy to deploy.

Because Ansible is all about automation, it requires instructions to accomplish each job. With everything written down in simple script form, it's easy to do version control. The practical result of this is a major contribution to the "infrastructure as code" movement in IT: the idea that the maintenance of the server and client infrastructure can and should be treated the same as software development, with repositories of self-documenting, proven, and executable solutions capable of running an organization regardless of staff changes.

While Ansible may be at the forefront of automation, systems administration, and DevOps, it's also useful to everyday users. Ansible allows you to configure not just one computer, but potentially a whole network of computers at once, and using it requires no programming skills. Instructions written for Ansible are human-readable. Whether you're entirely new to computers or an expert, Ansible files are easy to understand.

Ansible is designed to be very simple, reliable, and consistent for configuration management. If you’re already in IT, you can get up and running with it very quickly. Ansible configurations are simple data descriptions of infrastructure and are both readable by humans and parsable by machines. All you need to start managing systems is a password or an SSH (Secure Socket Shell, a network protocol) key. An example of how easy Ansible makes configuration management: If you want to install an updated version of a specific type of software on all the machines in your enterprise, all you have to do is write out all the IP addresses of the nodes (also called remote hosts) and write an Ansible playbook to install it on all the nodes, then run the playbook from your control machine.

Ansible lets you quickly and easily deploy multitier apps. You won’t need to write custom code to automate your systems; you list the tasks required to be done by writing a playbook, and Ansible will figure out how to get your systems to the state you want them to be in. In other words, you won’t have to configure the applications on every machine manually. When you run a playbook from your control machine, Ansible uses SSH to communicate with the remote hosts and run all the commands (tasks).

As the name suggests, orchestration involves bringing different elements into a beautifully run whole operation—similar to the way a musical conductor brings the notes produced by all the different instruments into a cohesive artistic work. For example, with application deployment, you need to manage not just the front-end and backend services but the databases, networks, storage, and so on. You also need to make sure that all the tasks are handled in the proper order. Ansible uses automated workflows, provisioning, and more to make orchestrating tasks easy. And once you’ve defined your infrastructure using the Ansible playbooks, you can use that same orchestration wherever you need to, thanks to the portability of Ansible playbooks.

As with application deployment, sitewide security policies (such as firewall rules or locking down users) can be implemented along with other automated processes. If you configure the security details on the control machine and run the associated playbook, all the remote hosts will automatically be updated with those details. That means you won’t need to monitor each machine for security compliance continually manually. And for extra security, an admin’s user ID and password aren’t retrievable in plain text on Ansible.

The first step in automating your applications’ life cycle is automating the provisioning of your infrastructure. With Ansible, you can provision cloud platforms, virtualized hosts, network devices, and bare-metal servers.

Why do we need to learn Ansible?

Ansible makes the everyday IT task easier. IT tasks like storing the data, transfer the data, processing the data, dealing with bugs, installation, managing the security, etc. It is highly scalable. Big Software like Splunk Universal Forwarders is installed or updated with so much overhead and time-consuming. But Ansible makes it easy by configuring them and making everything automated. It removes the extra dependencies of the IT environment. Ansible just utilizes the playbooks which are nothing but YAML files that contains the express configuration instructions. It helps to coordinate the processes which contain IT incidents, service request, service change, ad-hoc activities, etc.

Provisioning:- Ansible automates the provisioning of any IT infrastructure which can contain the life cycle of the application. Ansible can provision network devices, virtualize host, cloud platform and bare-metals.

Security:- Security policies can be newly defined by ansible which can be integrated with other automated processes. To improve the security of different nodes, one needs to configure security details once in the control machine and this will integrate with all other nodes automatically.

In order to start learning ansible, you should have hands-on experience in using commands in Linux shell.