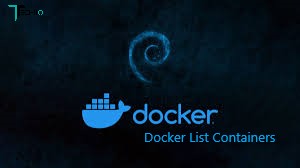 We will discuss How to List Containers in Docker.

Given below are the examples mentioned:

We have numerous holders in various states like a few compartments are running and some are in left status or some other state other than running. We need to list every one of the holders whether or not it is running.

a. How about we make a couple of snow capped compartments as beneath:

b. Now, we can run either ‘docker container ls’ or ‘docker ps’ command to get the list of the containers as below:

Let’s assume we have hundreds of containers running on a host and we want to see specific containers, for example, all containers that are exited, have a specific name, id, label, volume, network, etc.

a. Create few containers with labels and names as below:

b. Let’s start filtering these containers with id first as below:

c. We can also filter on the basis of the name of the container as below:

d. We can filter the container based on its labels as below:

e. We can filter the containers based on its image as below:

f. We want to filter containers running before and after a specific container, we can use before and since filter as below:

There are other filters available as well.

Get familiar with the utilization of the '- design' choice. To show a particular field of the holder or arrangement the result according to our need. We can design in light of compartment ID, picture ID, order, ports, and so on

a. To show just holder's ID, then, at that point, use - design choice as underneath:

b. If we want to output name with the id then we have to add that field as below:

c. We can use the ‘\t’ to make more room between the fields as below:

d. We can use multiple fields at the same time and any symbol if you want as shown below:

e. We can check labels or any other hidden fields that is not shown by default when we list the containers.

In the above snapshot, only one container has a label i.e. type=db.

f. We can see that the output does not have column headers like ID, Name, Label, etc. We have to use the ‘table’ directives as below:

It gives us a cleaner output as well.

We want to list last n created containers. We can do it by using the ‘–last’ or ‘-n’ option as shown below:

The above example shows the last 2 created containers and also includes all containers.

We can use the ‘-l’ flag to list the latest created container. It shows all the containers regardless of their state without specifying the ‘-a’ flag.

Sometimes we have issues with the output due to screen size or more columns so by default Docker daemon truncated the output of some columns as below:

In the above snapshot, we see that the ‘COMMAND’ column has been truncated.

We can use the ‘–no-trunc’ option to display full value of that column as below:

If we want to list container ID only then we can use the option ‘–quiet’ or ‘-q’. It is similar to using the ‘–format’ option with ID only. We can pipe it to the ‘wc’ command to count the containers as shown below:

If we want to display the size of the containers, we have to use the ‘–size’ or ‘-s’ option as shown below, however, we can output the same thing using the ‘format’ option as well but this command it is quicker.

We can indicate various choices to get the rundown of holders anyway most helpful choices are the 'channel' and the 'design' choice. More often than not we utilize the 'docker ps' order as we need to type less.