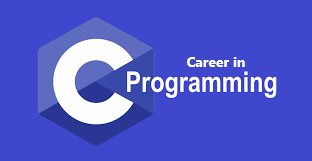 Today let's discuss what would be the career lineup in C programming.

C is referred to as the basic language and it has been taught in school as well. To learn C, you should have basic computer knowledge. There is no specialization is required to learn C. Before starting programming C, the computer should have a C compiler to execute the code which converts C code into machine code. The other software required in a computer is a Text editor to write the C program. Notepad and notepad++ can be used to write the C programs. The filename extension of these programs should be ‘.c’. The different IDE (Integrated Development Environment) can be used as well. Some developers are mainly preferred to work in IDE rather than a text editor. The IDE is like Visual studio, eclipse, etc. As C is referred to as the basic language, while learning this programming language you will learn many important things like decision making, branching, looping, use of operators, the syntax of programming, and logic building which will help you in learning other languages as well.

Job Positions or Application Areas For Career in C Programming

There are different Job positions or application areas for a career in C programming language, where an individual can apply as per his/her knowledge. In India, there are different sites where you can check the openings or open job positions for different roles like Senior engineer, Technical architect, team lead. It helps in making yourself available for entry-level programming positions, once having experience in this language you are available for high roles as well. The best part of having C programming language as a skillset is individuals can fit into any domain whether it can be banking, networking, IT, education, management, etc. Almost every organization does need a C programming developer. In many organizations, there are dedicated job positions and levels for the C programmer which make them different from other language programmers.

C programing language requires a lot of passion to learn and develop different software programs. One should have eager to learn things, logical thinking, creativity, imagination experience things, and curiosity. It takes a lot of time to achieve things and having a reasonable level of competence and never stopping learning attitude makes the difference. If one can write the software programs and understand the logic or create the new thing of existing that is perfect for software programming. C being the simple, basic, and providing good career, salary, and Job position is the most widely used and perfect for beginners to start learning to the program and take their career to the next level.